In celebration of the upcoming Ace-Hil-Ink Dual Genre Release (2 different authors – 2 different genres), Ace-Hil-Ink will be giving out FREE SIGNED PAPERBACK COPIES of both stories to 3 select winners.
“MarcoAntonio & Amaryllis” by. Y Correa (Romance)
“Floor Four” by A. Lopez Jr. (Horror)
Entering is SIMPLE! Just leave a comment here telling us what your favorite Romance and Horror stories are – and instantly you will be entered into the drawing to win FREE SIGNED PAPERBACK copies of BOTH stories! To increase your odds of winning, Join The Project, the free newsletter of A. Lopez, Jr. (Exclusive content and giveaways to members)
You may also leave a comment at Fate Books Blog for a chance to win!
Winners will be chosen June4, 2013 . . . Good Luck!

by Y. Correa
The year 1585. The Anglo-Spanish War. England invaded Spain for crops, land and supplies. A war had started. Land against land. People against people. Hatred, despise and intolerance were a way of life. Why were they so apposed to one and other? No one knows for sure…
MarcoAntonio, was a Spanish gentleman and knight. Amaryllis, an English lady. Prohibited from being together. Taboo romance. Intermingling of bloodlines was sinful and forbidden. Interracial love affair in the Middle Ages…? Yes! That was exactly it! Though, their love was not allowed, they loved each other regardless.
What would it bring? What would the outcome be? How would they overcome? 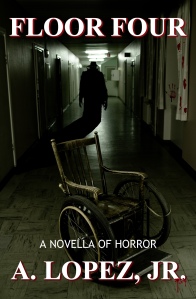 by A. Lopez, Jr.
The old, abandoned Saint Vincent Hospital is said to be haunted by the ghost of David Henry Coleman, the notorious serial killer, known as The Mangler. Coleman died on the fourth floor after being shot by police. For the three Jr. High boys, their curiosity gets the best of them as they explore the old hospital, despite ‘Old Man’ Jake’s warning. No one knew of Jake’s dark connection to the killer and the hospital. And now, on the anniversary of The Mangler’s death, a group of high school kids are planning a private party on the haunted fourth floor. Jake must keep everyone out and protect them from the true evil that lurks on Floor Four.